Apple electric vehicles, what is the iCar about?

I Apple Electric iCar For Sale I

The Apple Electric Car, is an electric vehicle being developed and researched under Project Titan a project managed by Apple Inc. A substantial number of Apple employees are working on it at the moment in 2015. The project was approved in late 2014, and assigned to a former Ford technician, called Steve Zadesky.

Steve Jobs, former Apple Chief Executive Officer initially had plans to develop and build a car. This is according to a firm’s board member, Mickey Drexler. Discussions about Apple electric car came about the same time Tesla launched its first electric vehicle the Model S. Up to date, Apple has been poaching employees from Tesla, for example David Nelson who is a former head of mechanical department in Tesla. This is a logical explanation as to why Apple is keen to be Tesla’s rival in production of electric cars in future years.

In 2015, Carl Icahn, Apple’s investor, noted that the car will be ready for the market as an ultimate mobile device by the year 2020. With Project Titan in progress, the car will be a self-drive type of vehicle; making it stand out among most of the cars you see around. Apple are using a super-secret testing complex that has been developed to ensure that iCar prototypes are built securely without incidences of system hacks or cybercrime faults. This is according to reports of a meeting held in between Apple team and top military staff in the United States, in a San Francisco disused naval base.

Already, renowned car manufacturers, namely Mercedes Benz and Honda have used this facility to test drive their cars. The facility boasts miles of paved ways with city streets and tight security, as it is guarded by the United States Military. In addition to this, there are tunnels, overpasses, rail crossings, ideal for testing Apple’s iCar in a real world scenario.

Apple in talks with BMW on electric car

German publication, Manager Magazine cites Apple talks between the giant car manufacturer BMW on using BMW i3 electric vehicles as the prototype for iCar being developed by the tech company. Apple executives are said to have been in Germany discussing a deal that would see sharing of technology across board between the two companies.

Information touching on connectivity topics were subject of discussion. Apple is particularly interested in making a similar carbon-fibre reinforcement used in BMW’s i3 electric car. Note that the i3 electric car, is a fully electric car sod throughout the UK and Europe.

It is worth noting that the negotiations between BMW and Apple were fuelled by the smooth trading relationship between the two firms. BMW was the first giant car manufacture to incorporate Apple iPod devices to its vehicles functioning. This is the driving force in Apple as they want to have Project Titan move forward.

Apple Incorporation is a world renowned tech firm. By venturing into car manufacturing, many may view this as a disastrous step that could see its downfall, since cars are commoditised by their makers and expensive to build in the first place. In addition to this, with the iCar, it may suffer great depths of low margins as it is rumored to cost up to a tune of eighteen thousand pounds.

Technology is dynamic in the world today. Vehicles are being automated from their ownership to how they operate. For Apple, a giant brand in technology, dynamism is not much of a challenge as they do this day in day out, they strive to updated both their hardware and software which may be necessary to maintain their transport systems in the coming years. 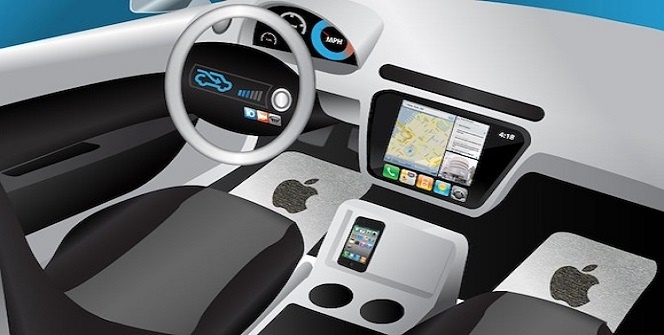 iCar, boasts of a windshield screen with up to four times as many pixels as those in Apple phones’. The high resolution windshield will help users, in navigation and management of the vehicles operations when in use. Another functional advantage of this type of windscreen is its ability to offer clarity and detail when driving.

The windshield is also strong, in that it only cracks under a lot of pressure, for example if hit by a heavy object. Upon cracking, the car still functions properly for some time before a replacement on the shield is made.

Another feature is the use of a fully integrated Apple iCar power pack. Apple electric car is a big change, looking a time frame of over twenty years. In that period, gas or petrol may be exhausted making car manufactures all turn to designing vehicles connected on electric grids for power.

Self-driving vehicles will be the face of transportation in the future.To combat security breaches, drivers will be prompted to log in to an iCloud before driving the vehicle. It is security measure, aimed at combating cases of cybercrime which is rising in the world. In the iCar, one logs in before engaging the gear lever in order to drive off.

iCar will be compatible with major roads in the world. However, driving speeds maybe limited to inexperienced drivers in the first place. For experienced drivers, speeds can be adjusted to fit their past settings.

The car is also lightweight but powerful. It can move swiftly and fast in a controlled manner in a specific direction, for example across six different lanes of heavy traffic. This is to enhance efficiency, eliminating incidences of jams on traffic routes.

These are vans used by Apple to gather information that will be used in improvement of Apple Maps. The information will be used in the Street View imagery and a full coverage of street distances and views are vital in making maps for the cars. Recall that the iCar works in collaboration with a number of sensors that is also present in self-driving cars.

Although Apple has worked on a number of projects that never meet the markets’ eyes, Apple team is however committed to releasing its own electric car to the market. Since the launch of Project Titan late 2014, for the Apple team, it is too early to determine the fate of this car. iCar however, is not going to be shelved any time soon, according to Apples board members.

Find out about Apple Electric Cars For Sale