Renault e.dams, backed by the French manufacturer, return to Formula E as the reigning teams' champions having formed last year specifically to compete in the all-electric race series.

Based just outside France, the squad is a joint venture between two of the biggest names in European motorsport; Jean-Paul Driot, founder of top single-seater team Dams and four-time Formula One World Champion Alain Prost.

With almost 25 years' experience, Jean-Paul has led his squad to numerous team and driver titles including International F3000, A1GP, Auto GP, GP2 and Formula Renault 3.5. Meanwhile, Alain is one of the world's most successful and experienced drivers with four F1 titles (1985, 86, 89 & 93), 51 Grand Prix victories and 108 podiums to his name.

Dragon Racing was founded by Jay Penske and Steve Luczo (Chairman & CEO of Seagate Technologies) in 2006. Dragon Racing is headquartered in Los Angeles, California, the largest EV (electrical vehicle) market in the world, and has additional operations in Britain (Donington Park, UK). The Dragon Racing team competed in the IndyCar Series from 2007 until 2014, and in 2014 Dragon Racing became one of the founding Formula E teams.

In the inaugural season of Formula E, Dragon Racing finished runner-up in the championship behind e.dams-Renault. Excellence and reliability were the core tenants of the 2014/2015 Season, as Dragon Racing was the only team to score double podiums finishes at the DHL Berlin ePrix (1st & 3rd) and Visa London ePrix (2nd & 3rd). The Dragon Racing engineering and mechanic personnel are some of the finest and most experienced crew in the world, accounting for over 175 years of racing experience, and have won over 280+ races and achieved 17 championship wins.

With five titles to its credit in DTM alone, Abt Sportsline is one of the most successful German teams, which has also achieved victories and titles in GT and endurance racing.

Led by Team Principal Hans-Jürgen Abt, the squad is located in Germany’s Allgau region, and will compete under the name of ABT Schaeffler together with support from Audi Sport - the name used in its successful commitment as an Audi factory team in the popular international touring car series DTM.

The Formula E venture marks a return to the team's early Formula outings in the 1990s when ABT scored its initial successes in Formel ADAC and Formula Three.

During the inaugural Formula E season, the team enjoyed success with drivers Lucas di Grassi and Daniel Abt, ending third overall with di Grassi being a title contender throughout. Following an announcement in May 2015, the squad will retain its driver line-up for the 2015/2016 season.

The NEXTEV TCR Formula E team began life as Team China Racing, which was founded in 2004 to compete in the A1GP Championship. Led by Steven Lu and Yu Liu, the team has competed in a number of international racing series including A1GP, WTCC, FIA GT and Superleague Formula.

2014 saw the team make the move to Formula E for the inaugural season and have a highly successful debut year. NEXTEV TCR secured first place in the drivers’ championship and finished fourth in the team’s standings.

Virgin is a brand that is strongly associated with technology and innovation, and is passionate about developing pioneering technology that can be put to commercial use, in the case of Formula E, directly impacting on cars on the road.

For the 2015-2016 season, Virgin partnered with the DS brand to become the DS Virgin Racing Formula E Team. The team will once again be headed by team principal Alex Tai, who has been directly involved in a number of Virgin’s pioneering technology projects in aviation, space and more recently racing, alongside Sir Richard Branson.

For the inaugural season, Virgin enjoyed two victories through Sam Bird on their way to fifth overall in the teams' championship.

With its roots in Indianapolis and led by racing legend Michael Andretti, Andretti is one of two US teams competing in the FIA Formula E Championship. In season one the team saw success with several of its drivers but most notably Jean-Eric Vergne, with the team ending the season sixth overall.

In addition to Formula E, Andretti fields multiple entries in the Verizon IndyCar Series, as well as a multiple campaigns in Cooper Tyres Indy Lights and the Pro Mazda Championship, and are a factory team in the VW Global Rally Cross.

Team Aguri is a Formula E team with Japanese heritage, entering into the second season of the Formula E championship after a successful first year including an inaugural win in Buenos Aires with Antonio Felix Da Costa.

Already a major global force in the development and production of electric vehicles through its Mahindra Reva Company, Mahindra Racing is the only Indian team to race in Formula E.

Mahindra Racing is no stranger to international motor sport, competing in the FIM Moto GP World Motorcycle Racing Championship – the first Indian team to do so in 2011.

Headquartered in Mumbai, India, Mahindra is a $16.2 billion multinational group employing more than 180,000 people in over 100 countries.

In season one, the team finished eighth in the overall standings with Bruno Senna and Karun Chandhok at the wheel.

With its headquarters in Monaco, the Venturi Formula E Team was founded by Gildo Pallanca Pastor, founder of pioneering EV manufacturer Venturi Automobiles.

Venturi Automobiles is a leader in high performance electric vehicles developing a range of sports, urban and utilitarian cars, as well as being the current holders of the world land speed record for an electric vehicle with 495kph (307mph).

Venturi becomes one of the eight manufacturers for season two, using a powertrain based on its 3,000hp Venturi VBB-3 electric streamliner.

During the first season, the team ran with Nick Heidfeld - who secured the team's only podium finish in Moscow - and Stephane Sarrazin, on their way to ninth in the teams' standings. 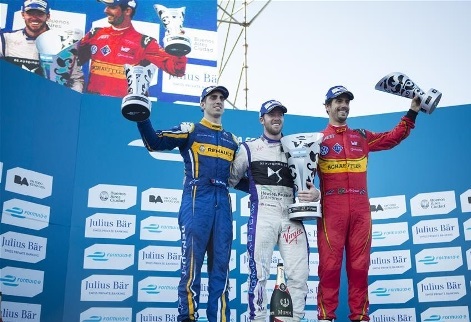