Peugeot’s city car is now with on sale with this, the second-generation Peugeot-Citroen-Toyota-developed pocket-rocket. It may be the company’s smallest and least expensive model, but it has now grown up to be a lot more sophisticated, better equipped, slightly longer and about 55kg heavier than the model it replaces. The little 108 is also cleaner and more efficient with every model in the range coming in at 99g/km of CO2 emissions or below to qualify for zero road tax.

This improved efficiency comes courtesy of the availability of stop-start and a fuel-saving automated gearbox on some models. But it is also a lot more svelte than before, because its drag co-efficient (how cleanly a car punches through the air) has been reduced from 0.34 to a very impressive 0.29.

Because the 2nd generation 108 rides on the same platform as used in the 107, the overall dimensions have changed little. It is 40mm longer, slightly lower and with an identical width but its design gives it more of a cab-forward style, meaning that proportionately it has a longer bonnet. The face of the 108 adopts the Peugeot corporate look which translates into it having the most conventional, but nevertheless rather sophisticated façade of the three models in the Peugeot/Citroen/Toyota trio.

All three cars in the tripartite – the Peugeot 108, Citroen C1 and Toyota Aygo – use the Toyota-developed 67bhp 1.0-litre 3-cylinder engine that was available in the outgoing 107. But Citroen and Peugeot also use a PSA Group-developed 1.2-litre VTi Puretech triple-cylinder unit that develops 81bhp (the ‘82’ referred to in the title is the power output given in PS) – and it is this engine, mated to a 5-speed manual transmission, that is the focus of this first impression.

The little 1.2-litre unit offers a very useful 86lb ft of torque. That compares to the 71lb ft that is available in the 1.0-unit. We describe it as ‘useful’ because it is delivered relatively early too, at 2,750rpm rather than the heady 4,800rpm in the smaller engine. This means that straight away the larger engine feels more frisky and punchy, and this is translated into the benchmark 0-62mph sprint: in the 1.0-litre, it arrives in a rather pedestrian 14.3 seconds, whereas in the 1.2-litre it can be accomplished in 11.0 seconds.

The 1.2-litre unit is only available on the top two trim levels (of four: Access, Active, Allure and Feline) offered by Peugeot, which means at the least, you will need to pay a premium of £1,250 to get the power boost. But that does get you extra equipment. 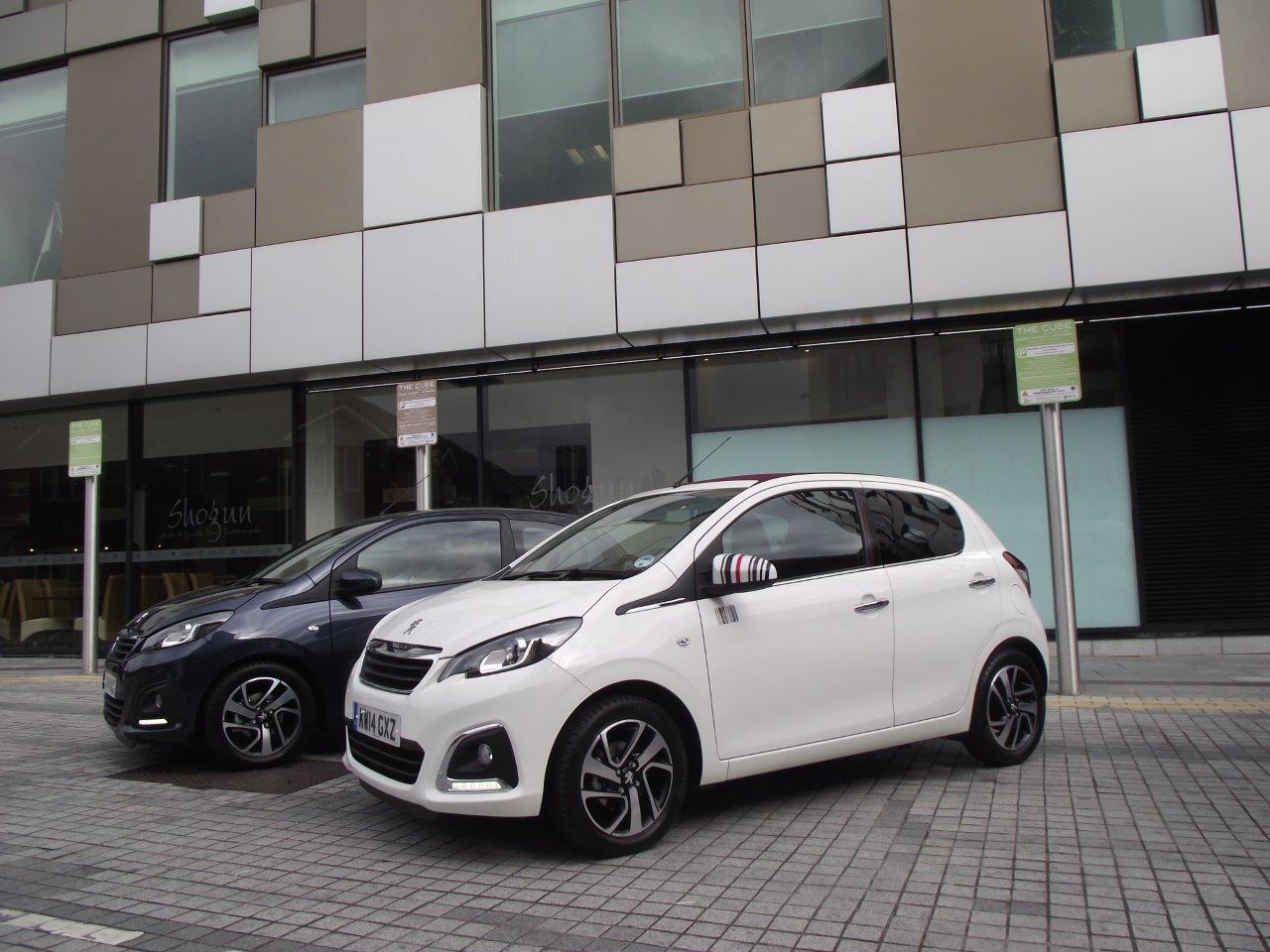 On start-up, the subtle thrum from the engine translates into a small vibration that can be felt through the seat, but this completely disappears as soon as you touch the accelerator. Instantly, the engine becomes smoother. But the light and late-clamping clutch that only fully engages at the top of the pedal travel combined with the sensitive throttle means that progress in heavy urban traffic might be anything but smooth. Driveline shunt can also be readily detected, courtesy of the engine mounting system. However, the extra thrust is evident when some mid-range urge is required. It is delivered smoothly and is accompanied by an enthusiastic warble that serves to inspire you to make the most of what is available.

Yes, there is a little body role but that doesn’t really matter. The little Peugeot slices through curves, helped by steering that is accurate and displays a maturity of feel that is consistent. On twisting back roads you find yourself smiling in a way that you wouldn’t initially have thought – and all the while your progress is accompanied by a satisfying rhythm of the triple’s gurgle. The suspension is soft, but it gives the city car a pretty good ride, although at higher speeds it can get choppy.

Our test car came in Allure trim with the designation ‘Top’. This refers to the optional large electric fabric sunroof which can be opened and closed at maximum legal motorway speeds. Interestingly, this isn’t available on the flagship Feline models – the model which denotes Peugeot’s premium aspirations. It also comes as standard with a 7-inch touchscreen (fitted on all models apart from the base-level Access trim), but bizarrely, it cannot be had with an integrated satellite navigation, unlike the Toyota Aygo. Instead, you have to pair your smartphone to the Mirrorlink facility.

The minor controls are easily manipulated.

The front seats are comfortable and supportive. Not so in the rear where the space between you and the seats in front is so small. It was a shame that PSA/Toyota didn’t consider expanding the wheelbase slightly of the previous generation model – it could have made all the difference. As it stands, consider the new 108 (and C1 and Aygo models) more as a 2+2 because quite frankly, there is so little space between the rear seats and the gap ahead of them. Unless you regularly ferry children around, you might be well advised to save the cash and instead order the 3-door version.

And whilst the space behind them has been enlarged from 139-litres to 196-litres, the boot is still relatively compact.

Personalisation seems to be a key aspect on an increasing number of city cars today, and the Peugeot 108 is no exception. This extends to a selection of optional dashboard finishers for higher-end models – including Allure – and a variety of decal customisation packages. Our Peugeot test car had “barcode” graphics.

So in conclusion – is the extra cash for the 1.2-litre worth it? If most of your driving is outside of the confines of a city, unhesitatingly yes. But if is town-bound, then we cannot help feeling that the 1.0-litre unit is the choice, despite its weak mid-range pull. We think the smaller engine is more suited to the urban hustle and bustle – and it makes progress a lot more smoother than the 1.2-litre engine. It’s revvier too.

But the 108 is undeniably a city car, and on this basis, as is the way with all our road tests, we have to mark the car on its intended market. As a result, the larger-engined Peugeot misses its mark. The 108 is without doubt better finished and more grown-up than the model it replaces – not to mention it being more civilised and colourful in character. But the 1.2’s driveline needs to be sorted before we can give it a higher score. Unfortunately more points get deducted for the academic nature of the extra pair of doors, this means that regretfully this particular model in the Peugeot range ends up getting a relatively low score. It’s a fun car, but the 1.0-litre 3-door version is far superior and Peugeot knows what buyers want, so we will not be surprised to see plenty of 108’s on the road.

Associate Member of the Guild of Motoring Writers

and Managing Editor of