It wasn’t so long ago that spotting an electric car – even in London – was still quite rare, but in the last two or three years, an increasing number of models has resulted in the biggest presence than ever before. Last year, sales of plug-in cars quadrupled in the UK, from 3,586 to 14,498 units. This is still tiny, compared to the total number of cars registered in 2014 – 2,476,435. Indeed, alternative powered vehicles (including hybrids and pure-electric cars) accounted for just 0.59% of the total car market.

Despite the still small market place, there has never been more choice when it comes to selecting a pure electric or hybrid vehicle, with BMW and its i3 and i8, being perhaps the most high-profile entrant recently. And who can forget Tesla. But two manufacturers in particular – Toyota and Nissan – should be credited with kicking things off and starting the still small but growing trend for developing electric or hybrid vehicles, with the Toyota Prius and Nissan Leaf. But it was the first-generation Leaf that was the first to come to market as the first pure-electric passenger car that made sense with a decent range, four seats and a sensible boot.

So it seems fitting that we should take a look at this, the second generation Nissan Leaf. Built here, in the UK at Nissan’s manufacturing facility in Sunderland, more than 100 changes have been made compared to the old model, resulting in a reduction in weight of 32kg. So in a country where the average commuter distance is less than 60-miles round, and with Nissan claiming that the new Leaf can do 110 miles on a single charge, what is the Leaf like to live with on a daily basis?

Desira Nissan of Norwich loaned us a range-topping Tekna model to try out for a week to find out. 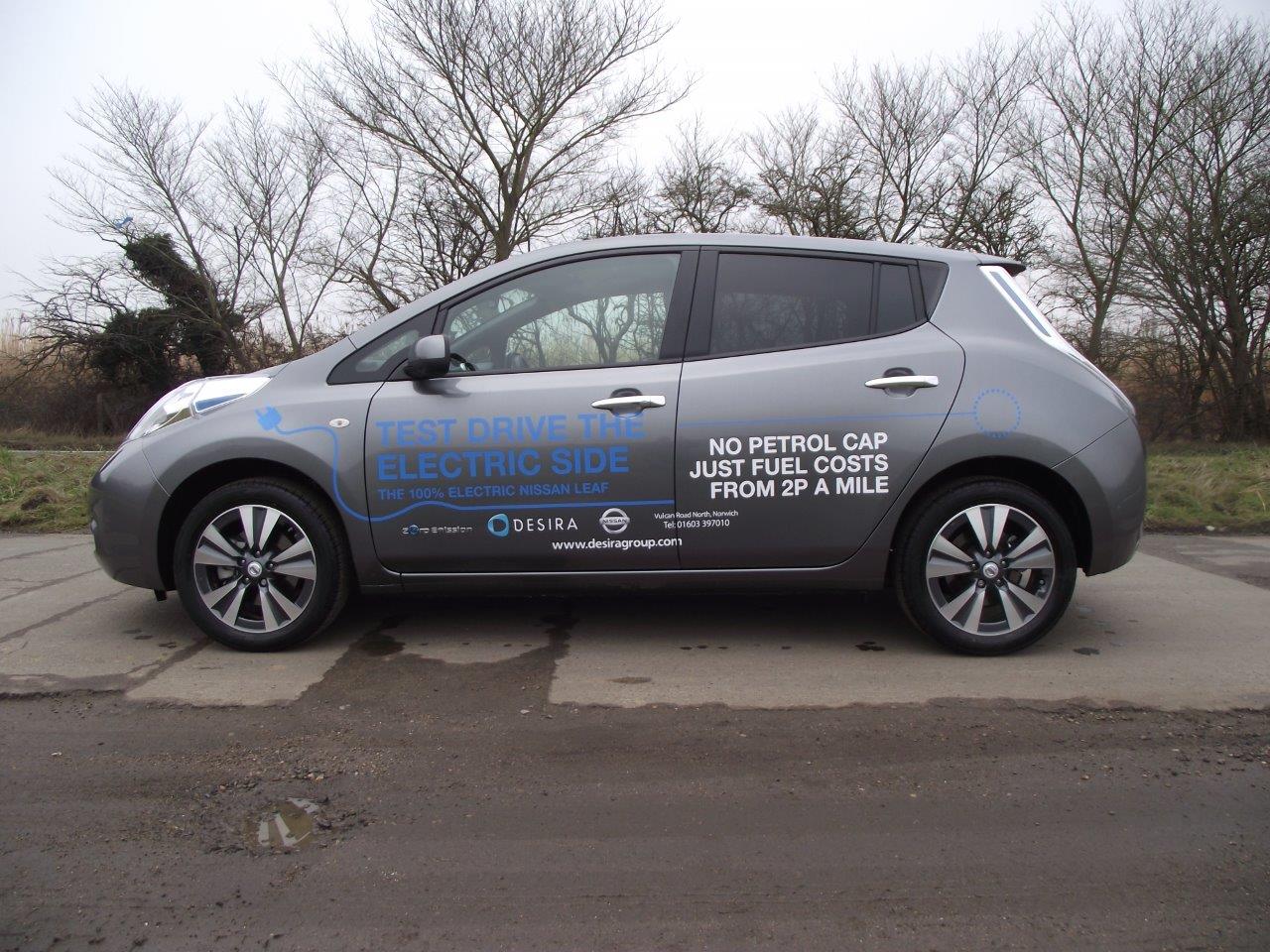 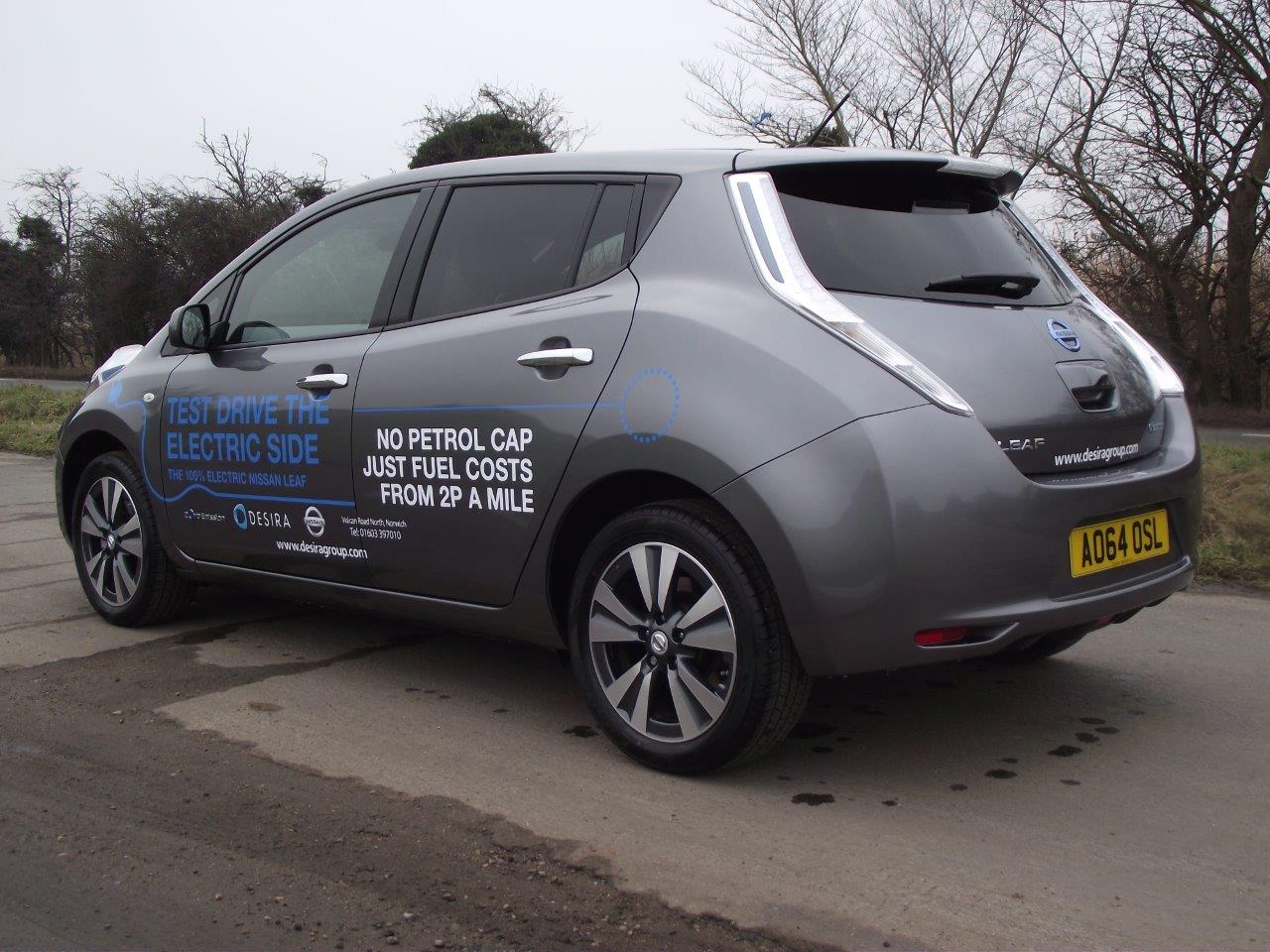 First, the basics – the Nissan Leaf is an all-electric car. That means it is not supported by a small engine to extend the range, nor is it a hybrid where the engine automatically takes over running the car once the electric power has been exhausted. That means that when it runs out of electric battery power, you come to a stop. This means you have to keep it charged.

Whether this is a problem is purely down to your own personal circumstances – but the benefits of it is that you no longer have to queue at the petrol pump and there are no worries about the spiralling costs of fuel. If you have a charger at home, you just simply charge it up overnight, and if you are lucky enough to have one at work too, simply top it up whilst you work. Simples. Overnight charging means that you are able to take advantage of lower electric tariffs, and Nissan say that a charge could cost you as little as £1.

Charging can be done in just six-to-eight hours at home with a 32-amp home-charger which can cost as little as £99 to buy and install. If you are in town and can gain access to a rapid charger, you can achieve an 80% charge in just 30 minutes.

Among the 100 changes Nissan has made to the Leaf is a new aerodynamic bumper and grille. The heating system, a killer when it comes to truncating the battery life, now uses less energy. But here is the first word of warning – the 110-mile range depends on a number of factors: the types of roads you travel on, how efficiently you drive, the weather conditions (particularly how hot or cold it might be), and whether you travel on fast roads, predominantly urban roads or a mixture of the two. It is not a problem – it is a factor to consider.

But this aside, as you drive, you can do so with a very big smug grin on your face. This is because you will be able to drive safe in the knowledge that your car is emitting zero noxious gases into the environment. This means you will be paying zero road tax too and, if you travel into the capital, will be able to do so without paying the London congestion charge. The other big benefit of being all-electric is the sereneness of your travel since because there is no engine, there is no engine noise permeating the cabin, or adding to the noise pollution outside for that matter too. Those driving an electric car for the first time will find it an almost eerie experience.

So, there are a lot of benefits so far.

Externally, the Leaf looks pretty much like any other hatchback. By no stretch of the imagination can anyone say it is a wacky, futuristic design. Instead, you get a relatively traditional looking five-door family hatchback. Some people we spoke to suggested that it was distinctly forgettable in terms of design. We don’t agree – mainly because we know that every shape, crease or nodule has been incorporated for a purpose. For example, the blobs on the top of the front lights are designed to direct airflow around the mirrors, whilst the distinctive rear is designed to smooth airflow over the car and reduce the amount of eddies which would otherwise hold the car back. 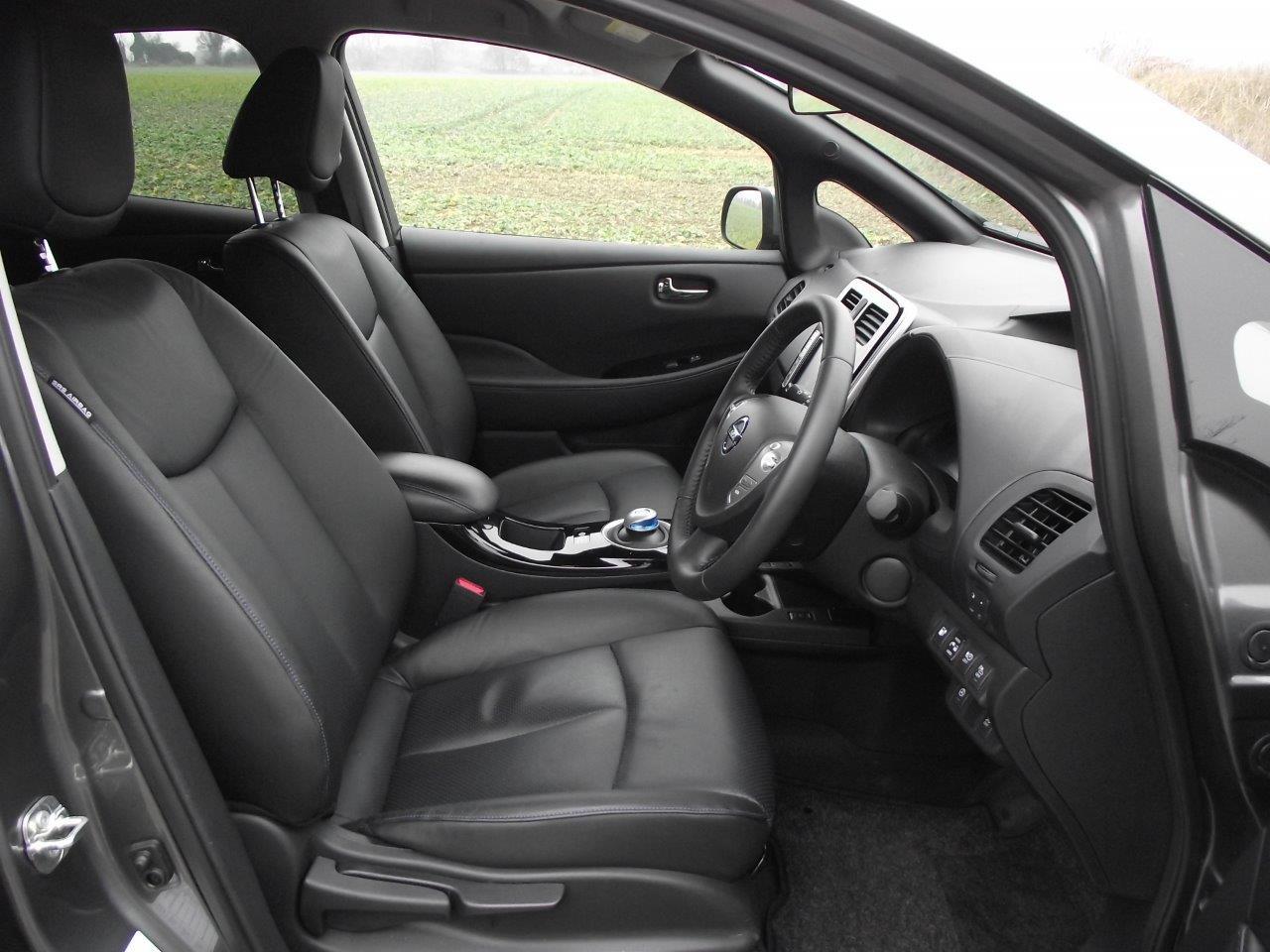 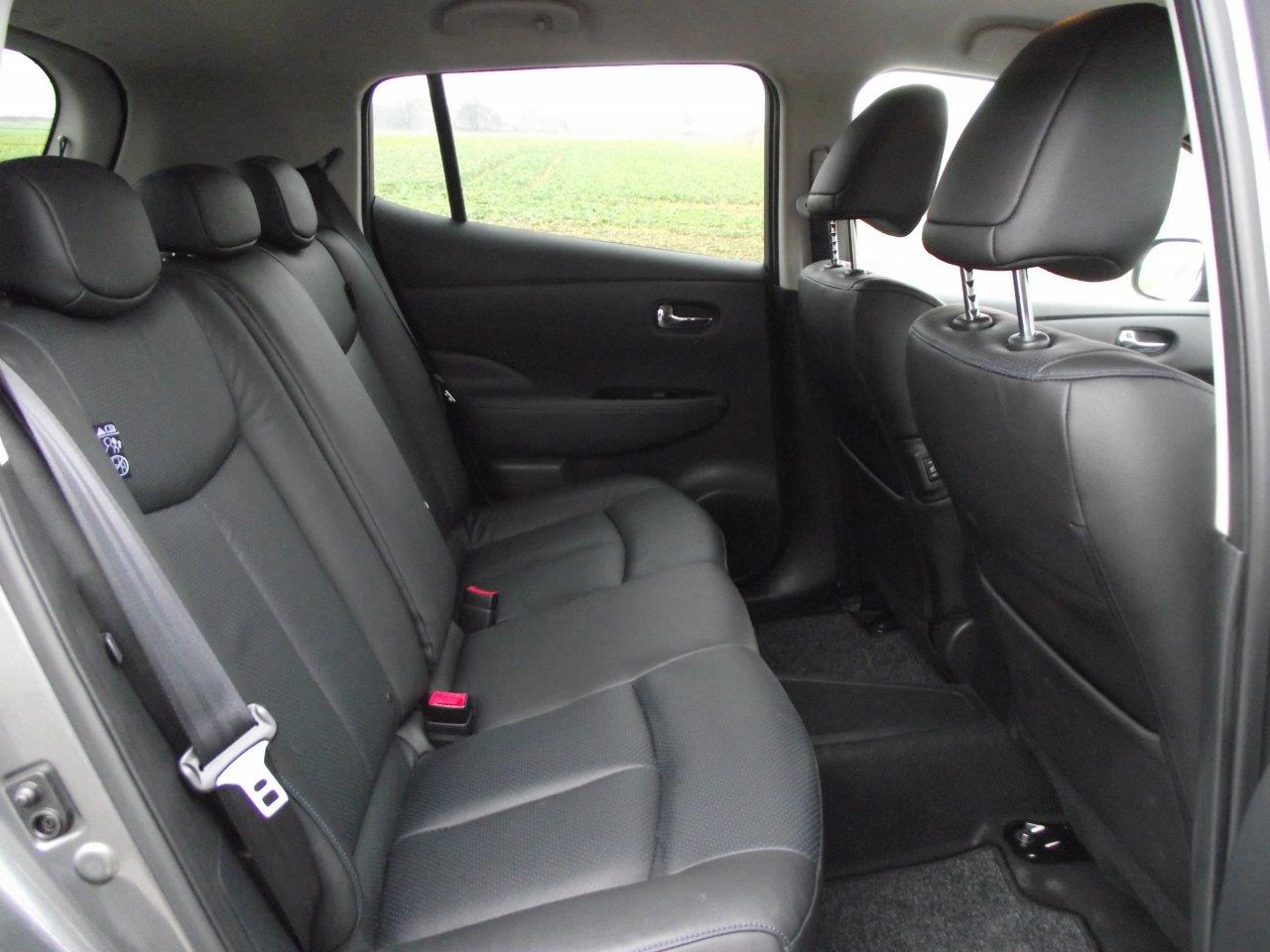 A flap at the front which prominently displays the Nissan logo hides the access to the charging point. 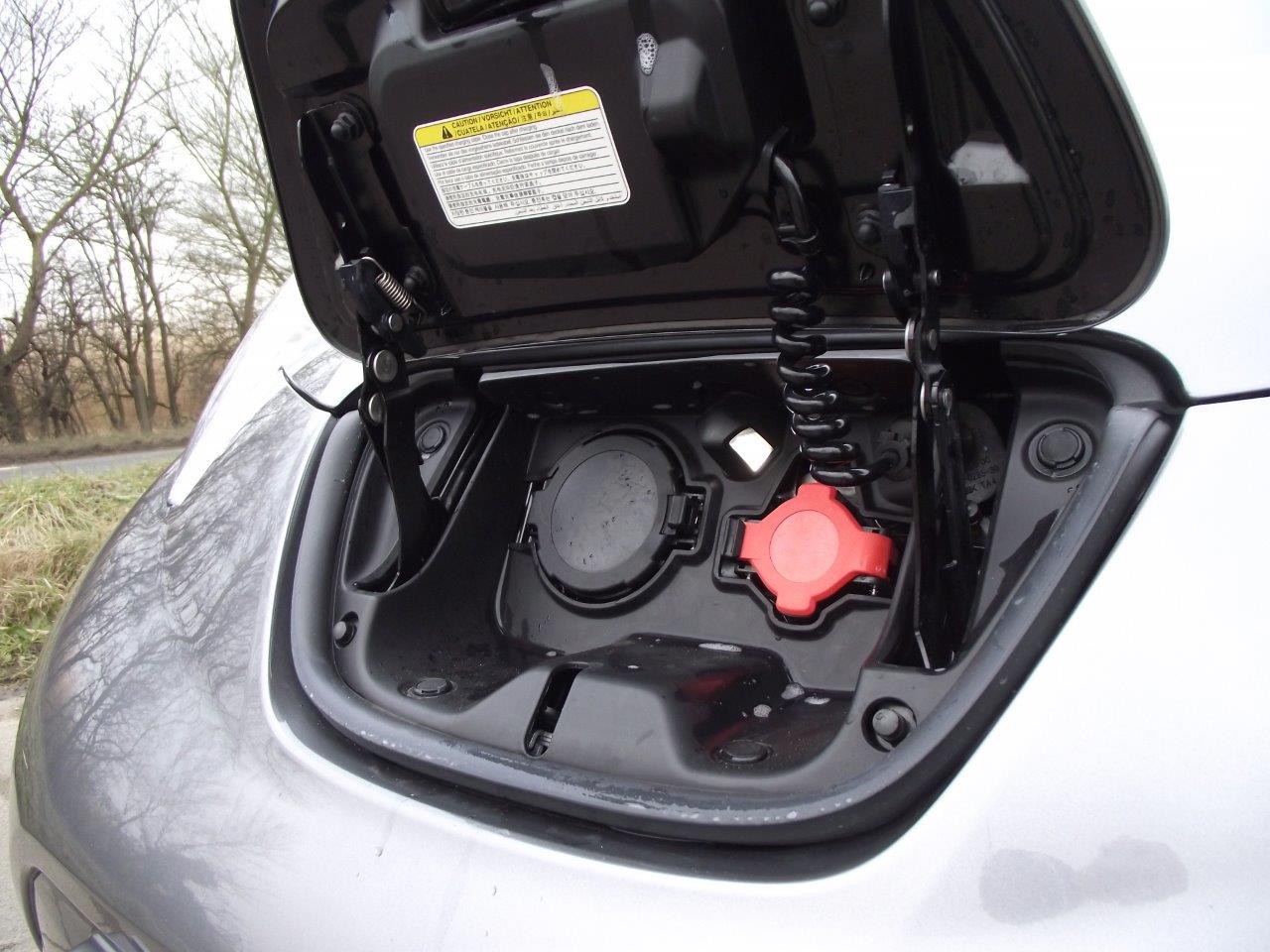 The feel of a normal car continues into the cabin where four are able to be accommodated with ease and where all occupants are afforded ample head and leg-room. Practicality is further enhanced by the 330-litres on offer in the boot. 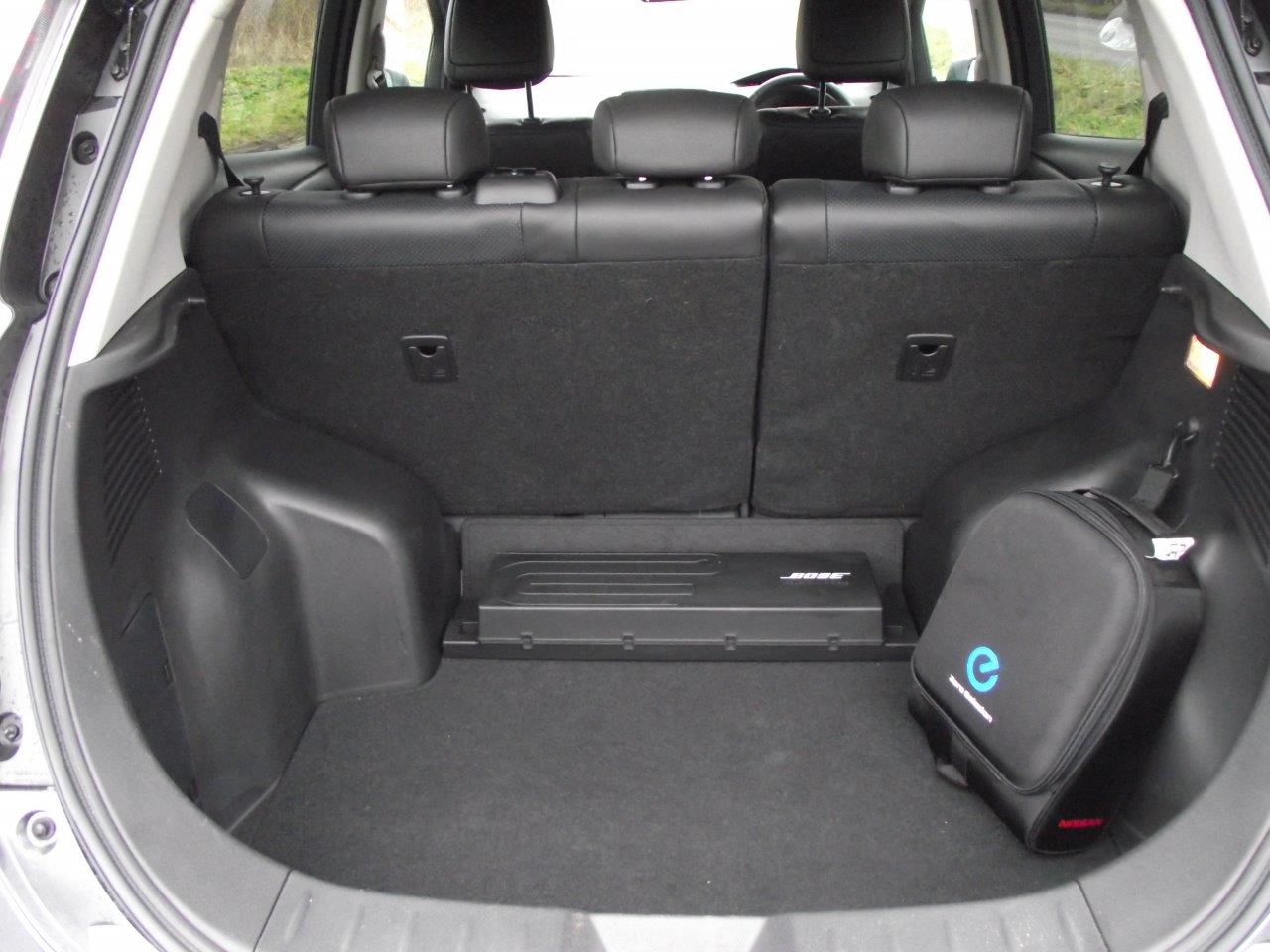 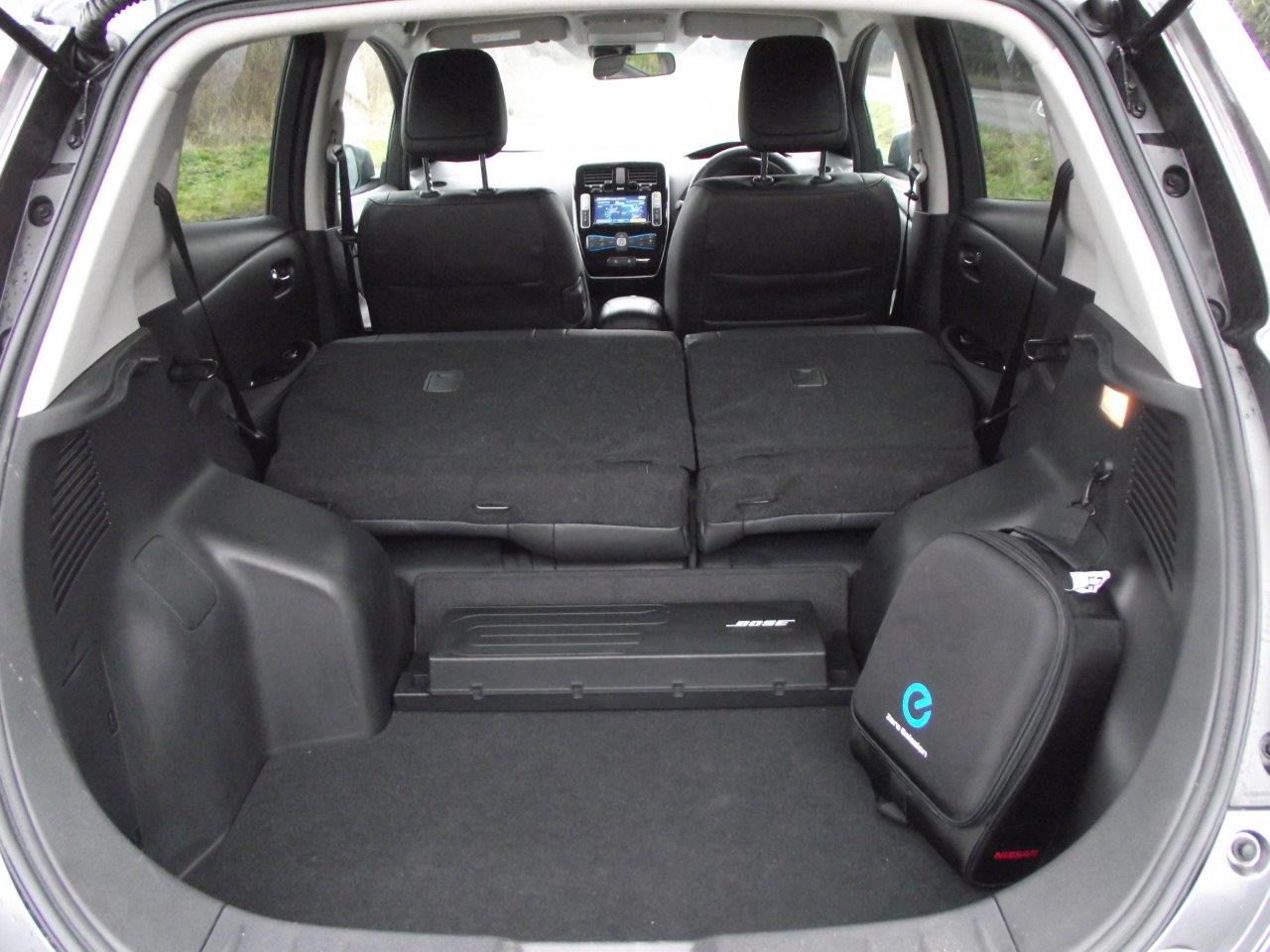 The driver ‘starts’ the Leaf by pressing a start button, whereupon the large dash display lights up accompanied by a noise that can only have been inspired by science fiction movies. Alongside the usual speedometer, the display provides plenty of useful information on battery charge, the amount of range remaining and even your driving style. 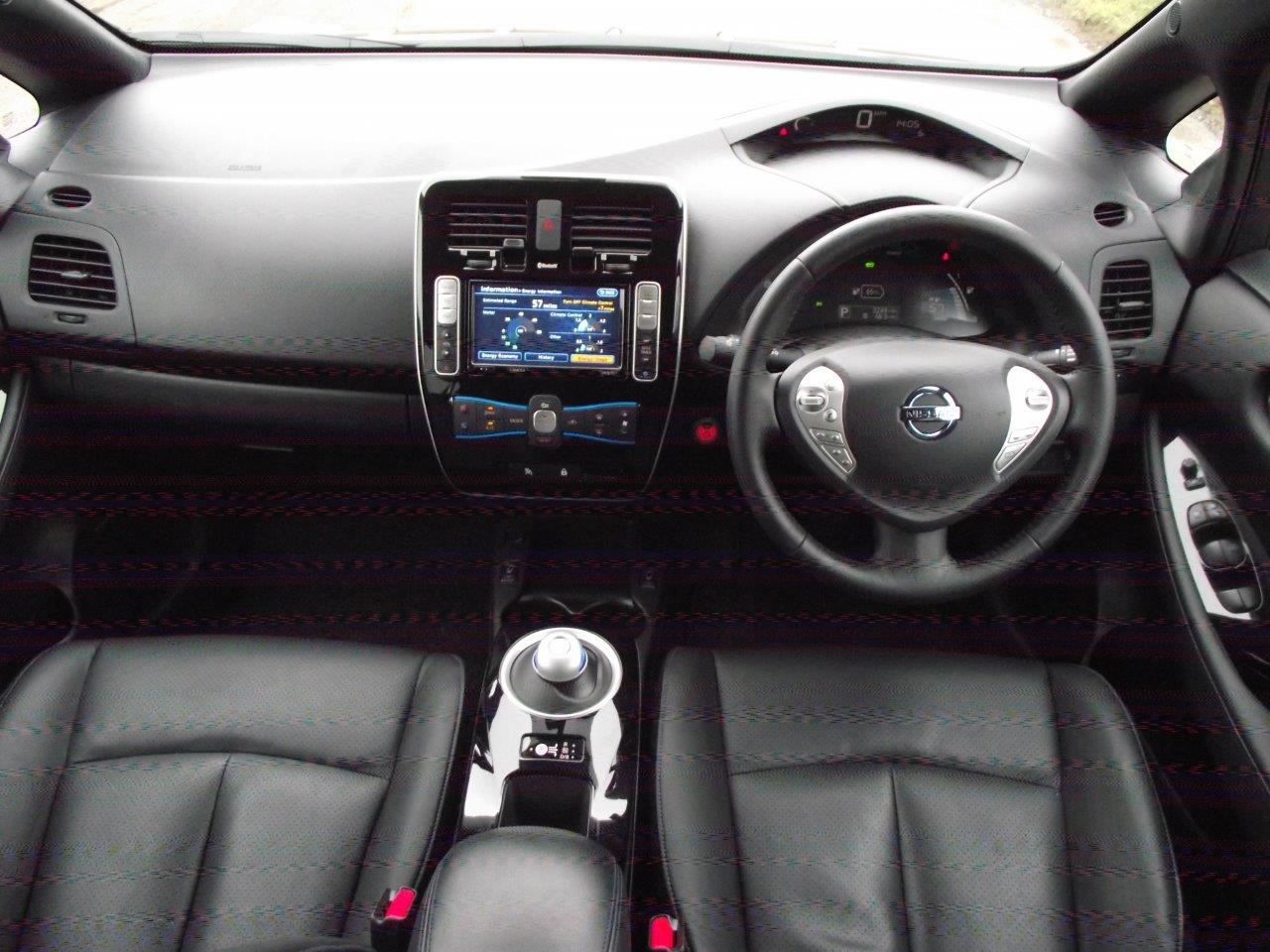 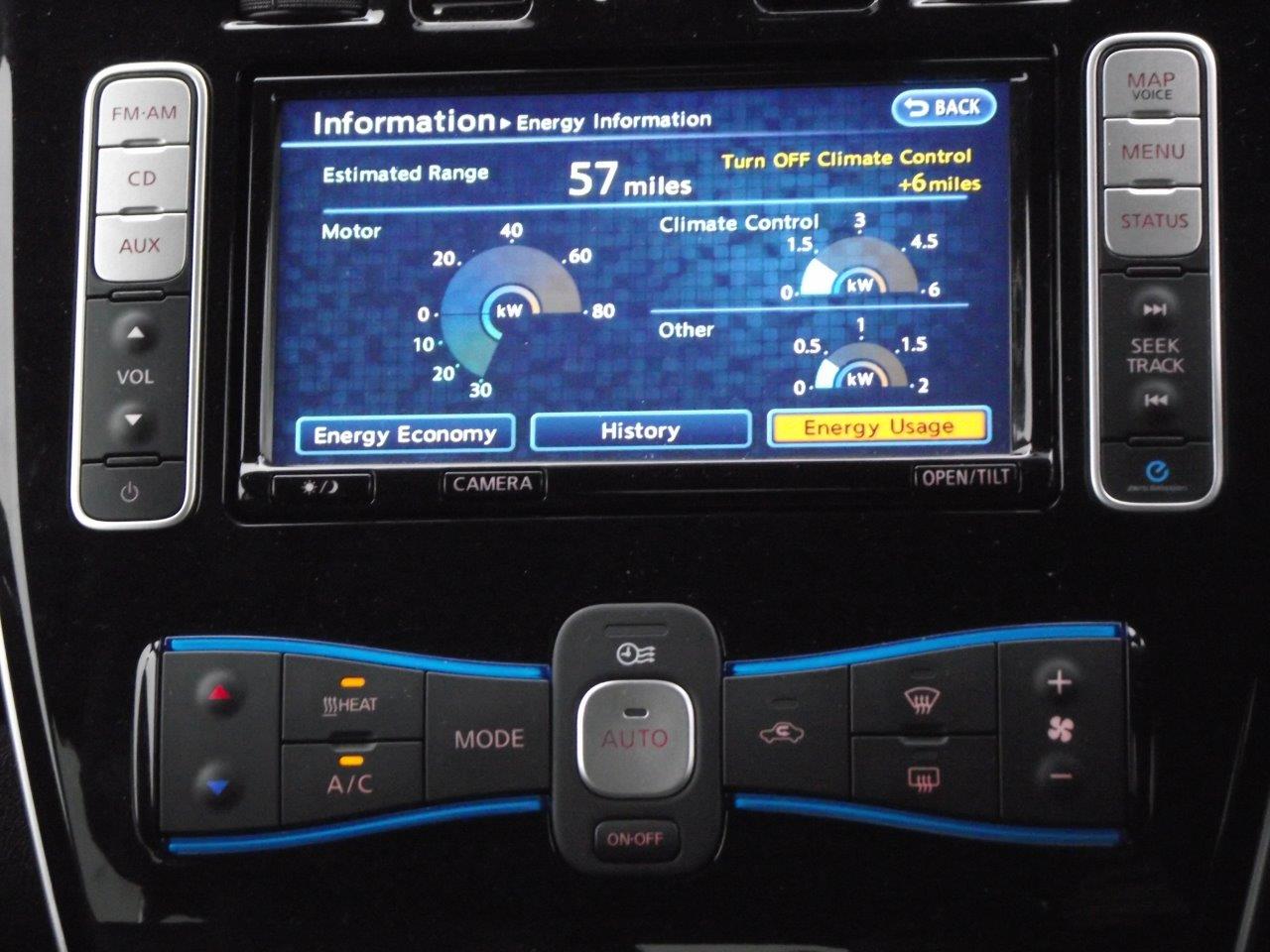 There is no doubt that if electric cars are to be properly considered and then adopted by the mainstream market in years to come, then they will need to be a natural evolution of the way cars drive today. And in the case of the Leaf, those experienced in driving an ordinary petrol or diesel automatic will have no problems getting to grips with the Leaf.

We have already referred to the eerie silence, but it is worth pointing out to those unfamiliar with the Leaf that they should expect to hear a gentle hum as it picks up speed. This, and the sound of the tyres rolling on the road surface and some wind noise above 40mph are the only things you hear. Some may find it unnerving at first, but you quickly get used to it. But the lack of noise also makes its speed of progress deceiving.

The electric motor produces 108bhp – and whilst this doesn’t sound a huge amount, with its seamless gearbox, there is instant acceleration available from the right-hand pedal. From a standing start, 62mph can be reached in a decent 11.9 seconds before going on to an artificially limited 89mph – although rapid acceleration and maintaining a high top speed will more readily drain the battery.

If the majority of your driving is confined to an urban environment, then there is no exaggeration when we say you could almost fall in love with the Leaf. There is absolutely no lack of power immediately available from the willing electric set-up.

And the positives keep on coming, because actually, the Leaf is a fun car to drive. For example, whilst not as sharp as a Focus or Golf, the steering is responsive and more than adequate for a daily drive – even when from time-to-time you might want to let your hair down and take it on some twisty stuff on fast A- or B-roads. It remains flat in the corners, inspiring confidence. Bumps are dealt with well and only larger ruts give any cause for discomfort.

Every Nissan Leaf comes with a smartphone app that opens up a world of opportunity for you, including allowing you to check your car’s charge remotely, seeking out nearby charging points and even setting the air conditioning to warm the car, even before you have left the comfort of your home.

So, there is everything to go for with the Nissan Leaf, so it seems – so why bother with any other car? Well, this is where we have to start redressing the balance in the spirit of fairness and giving our loyal readers a fair assessment.

The Nissan Leaf costs £26,000 – after the Government has made its contribution of £5,000 with respect to the plug-in car grant. A basic Ford Focus will set you back £13,995 – and this is what most other magazines and websites will compare it to. But the Leaf has a lot more equipment than an entry-level Focus and when you compare it to the Ford Focus 1.6 Ti-VCT 125 Powershift Titanium, things become more competitive. The Focus costs £21,045 – still a sizeable £5,000 difference. So the Focus deals a blow to the Leaf.

But people will consider the Leaf because of its green credentials and low running costs – the Leaf is a car with a conscience after all.

Residual values have been protected too by Nissan’s announcement that the expensive battery pack can be reused elsewhere or repaired as individual cells. All of this helps to keep the costs down.

The Nissan Leaf isn’t for everyone – But, if you regularly travel less than 60 miles per day, in primarily urban environments where the car is able to recharge itself because of its regenerative braking system, and have access at the least to an overnight charging point – or know that you can get regular access to a rapid charging point, then the Leaf makes more financial sense to you.

There is no denying that the Leaf does come with some drawbacks, as do all cars. Chief amongst them – as is the case with almost all pure electric cars - is the range of the batteries, but more significantly the infrastructure in place to allow you to readily charge the car when it requires it. The UK charging networks are constantly growing and this will help the take up of pure electric cars. But having spent a week with the all-electric Leaf, there is no denying that it is a brilliant car and Nissan should be congratulated for being at the forefront of what is still an emerging technology.

Companies like Nissan need buyers like you so that they can continue to develop the battery technology, and lobby the government to ensure that the investment in the infrastructure is made. Remember, 110-years or so ago, traditional internal combustion engines were still in their relative infancy – and just look how far things have changed there – particularly in the last 10-to-15 years.