xStorage, Home Energy Storage From Nissan is Now Available For sale in the UK

Energy conservation has always been a major concern for every homeowner and mostly stakeholders in the industrial sector. As there are various ways in your disposal to conserve energy, you can now store excess energy from the National Grid in a stationary storage device called xStorage. This is a new stationary power storage device manufactured by Nissan, the Japanese automaker in collaboration with Eaton, UK’s leading power management firm. The sale of these batteries is set to begin in September, for those living in Europe and later on, the US and the rest of the world and placing orders will follow soon after. Thereafter get the devices will be delivered to the customers’ homes.

In May 2016, Nissan’s Europe chief, Paul Wilcox, at an event in East London, confirmed earlier reports that the stationary power device could store power of up to 4.2 KWh. The device is made out of recycled batteries, coming from Nissan electric car model, the Nissan Leaf. The module will use up to 12 Nissan Leaf batteries, in order to offer a better power connection to a residential home. In addition, he cited that the estimated cost of this device will be approximately 3,200 euros.

This energy hoarding system boasts of saving households the high power costs, a common characteristic with peak seasons. The basic idea behind the making of this device is to help homeowners use the cache to power their homes and also sell off the excess power to the National Grid, when the demand for power is high. The 12 battery pack comes in handy when switching between other renewable power alternatives for example solar energy, which is much greener.

Currently, only Tesla and Mercedes Benz boast of having power storage units that could rival xStorage. They are Tesla Powerwall and Daimler respectively. Tesla Powerwall which uses higher capacity batteries is only available in the US and this could play in favour Nissan when it comes to providing efficient power storage units in the UK market only.

Moreover, Teslas Powerwall has a capacity of 7KWh and costs $3000. Nissan is set to face some stiff competition from the Powerwall, since xStorage has only 4KWh capacity and is more expensive. As for Daimler, its stationary storage unit could store up 13KWh coming from salvageable raw materials mainly coming from Mercedes’s used up battery packs. In addition, Daimler guarantees its customers of having a storage unit that could last up to ten years, operating efficiently. But what could be play in favor of Nissan’s xStorage is the cheap technology that comes with making of this battery, since the battery pack is basically recycled batteries from already used electric cars.

The target market for xStorage units can be classified into two. To begin with, xStorage can be used by consumers who use solar power as a substitute of power provided by the National Grid. Since solar panels store much of the solar energy in batteries, using xStorage as an additional storage unit will help in saving some energy for days to come. xStorage devices also targets electric car owners. Basically, electric cars use battery units that get depleted with time. Wilcox says that the development of xStorage units, they will provide electric cars owners access a second life for the electric car batteries. Currently, over 100 units of xStorage devices have been installed in homes of Nissan Leaf owners across the UK in order to recharge their cars’ batteries once they get depleted. 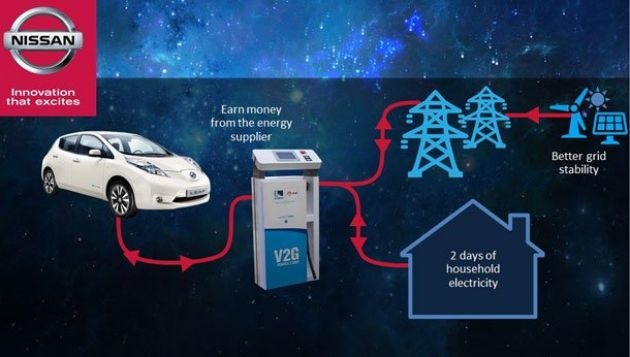 xStorage is also set to reduce the over dependence on the National Grid in the UK. This is because, it will provide greener alternatives to the public while allowing energy excesses be sold back to the grid. In case of power failure from the National Grid, it will serve as a backup for such eventualities in the long run.

Clients who purchase the xStorage units will enjoy smartphone connectivity. The connectivity will be in form of an app that will give owners power to control the storage unit with much ease. This means that the batteries are user friendly and combine Nissan’s expertise in the auto industry with that of Eaton, a reliable battery developer and leader in the making of quality electronics all over the world. Additionally, the storage unit will come with cables to connect it to the grid and installation cost are set to be included in the initial purchase price of the battery unit.

This device will be the first in the world to offer a fully integrated energy storage solution to the UK market. Unlike other energy hoarding devices, xStorage provides some degree of safety and performance to its users when it comes to distributing and storing power in the long run. Only certified installers are sent to install the unit to a consumer’s home, assuring them of safety and they only need to plug in and power without experiencing any difficulty. Its high specification functionality and easy usability, ensure that the storage unit fits seamlessly in the home environment thanks to its simple design and style synonymous with Nissan.

Cyrille Brison, Eaton Electrical EMEA’s vice chief, confirmed that the collaboration between his company and Nissan is also set to enable consumers get the most out of such technology. The two firms are also set to lower their production cost but deliver a well-integrated battery unit for its target market. There are over 1000 certified installers of xStorage in over 77 countries and offer free installation of this battery unit. This will ensure that the energy storage units can be easily accessed, installed and used to provide clean energy to most people in the UK and the rest of the world.

Nissan expects to sell over 100,000 xStorage units within the next five years. However, this figure could rise since there is an increasing consumer appetite for green energy, especially in the European market. In addition, the collaboration between Nissan and Eaton has a long term vision of developing a wide portfolio of energy storage solutions that will also serve commercial customers in years to come.

All in all, xStorage provides the most reliable energy storage system in the market today. In the long run, owners will avoid incurring high expensive energy tariffs.